In this study, the mapping of the reedbed (Phragmites australis and Typha angustifolia) current state at the Vromolimni area, Prespa National Park, was performed using classification trees analysis applied to two types of remotely sensed data, drone derived orthophoto mosaics and Landsat satellite images. Additionally, the vegetation history of the area was reconstructed by applying the same techniques into a timeline series of Landsat images (2000-2017). Furthermore, the mapping of burned areas was performed with image interpretation techniques. The study area was mapped using an unmanned aerial vehicle (UAV) with both RGB and NIR cameras with an original pixel size 0.1x01m that was rescaled to a pixel size of 5x5m for the analysis. Orthophoto mosaic classification tree analysis was performed and had an accuracy of 75.9% on the training subset with a commission error of 33.4%, 33.1% and 33.5% for T. angustifolia, P. australis and other habitat types respectively. From the ground truth data the model resulted in an accuracy of 89.6% for T. angustifolia and 85.7% for P. australis 85.7%. The classification tree applied on Landsat data (July 2017) had an accuracy of 89.5% on the validation subset while the commission error was 31.8% for T. angustifolia, 34.7%, for P. australis and 33.5% for all the other habitat types. The classification results from the Landsat images were further evaluated with ground truth data and had an accuracy of 98.7% on the T. angustifolia subset, and 85.7% on the P. australis.

According to the drone orthophoto mosaic classification the total surface area of T. angustifolia and P. australis stands in the study area in 2017 was estimated at 188.5 ha and 128.8 ha respectively. The image interpretation of high resolution drone images yielded a total burnt area of 4.5 ha at Vromolimni reedbeds in 2017 which affected mainly T. angustifolia dominant stands on the east lakeshore of the lake and is a result of the proximity to cultivated areas. From the Landsat image classification the total area was estimated at 205.1 ha (T. angustifolia) and 153.1 ha (P. australis). Even though the model of the Landsat analysis performs better from a statistics point of view than the drone derived one, the pixel size is too large for a good represantation of the complex mosaic of the vegetation which leads to a overestimation of the surface area of patches. The previously mentioned method was also applied to satellite images derived from 2000 (due to absence of previous years Landsat data) until 2017 in an attempt to reconstruct the vegetation history of the study area. The presence and the fluctuation of the water level within the P. australis and T. angustifolia stands modifies the spectral signatures of T. angustifolia/P. australis pixels annually and in combination with wildfire events resulted in unreliable results. In parallel, the absence of old ground-truthing data limited the application of available methods as well as restricted the validation of the results of the classification method applied.

Drone derived orthophoto mosaic proved extremely useful for the mapping the current state of reedbed vegetation and will serve as a base map for the monitoring of the vegetation dynamics during the following years of the project, the impact of wildfires and the post-fire vegetation development and will assist the vegetation management that will be performed within the framework of the program. 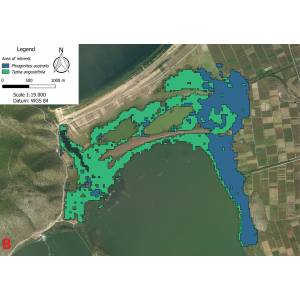 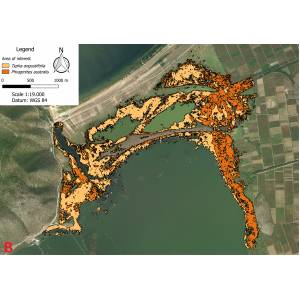 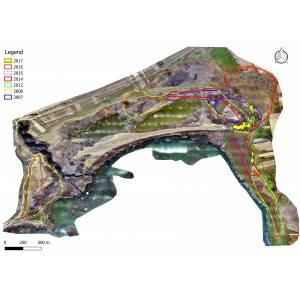