The ridges and furrows of Prespa

In the low-lying areas surrounding the lakes, people have been cultivating for centuries. The soils here have two significant disadvantages for farmers. In many places the groundwater is very close to the surface often creating marshes which made ploughing difficult and consequently sowing was not possible. Also, the proximity of these areas to the lakeshore made cultivation impossible due to flooding every spring.

The inhabitants of Prespa, however had long since found, no-one knows how long ago, an ingenious way of cultivating these lakeshore areas. They would use one-sided ploughs pulled by a pair of oxen in order to create narrow strips of land 100-200 metres long and 10-20 metres wide perpendicular to the lakeshore. Ploughing would start from the centre of the field and by working to the right and left of a centre line soil would pile up only on the left-hand side. Over time with successive ploughing the soil gradually shifted from the edges to the centre of the ground. In this was the strip of land resembled an elongated mound or ridge bordered on each side by two furrows. Two parallel ridges were separated by a furrow which was shared equally between the two neighbouring farmers.

What had farmers achieved with this method?  When the lake swelled in the spring and the waters flooded the surrounding areas, the furrows filled with water, but the ridges because their surface had been raised were permanently 50-70 cm higher, consequently they could be cultivated without the threat of flooding.  On the ridges, wheat, rye, maize and beans were cultivated whilst in the furrows natural grass grew which farmers would cut down in the summer with a scythe, each farmer would be allocated 2 scythe-widths of grass. Irrigation was not necessary as sufficient moisture was retained by the soil due to the proximity of the water so the plants root systems developed.  The mud in the furrows was rich in nutrients that would gradually be absorbed into the ridges ensuring natural fertilisation.  The biggest gain was, of course, that farmers could exploit this valuable area of arable land which would otherwise have been useless with other conventional methods.

In the British Isles this method was known as 'ridge-and-furrow'. In quite a few parts of Europe it survived almost until the middle of the 20th century.  Some claim that it has been applied since at least the Roman era, while others claim that it was invented in the British Isles around the 8th – 10th century.  To date Prespa is the only place in Greek territory that has recorded this method of cultivation. There are a few traces of similar methods in long stretches of fields in neighbouring areas of Albania and Northern Macedonia. However, the origins of this system and the time it was established in the area remain unknown. In the Greek part of Prespa this method of cultivation was abandoned relatively abruptly in the 1960s with the arrival of tractors and the complete remodelling of the rural zone by the land reclamation projects that preceded the construction of the irrigation network used today. 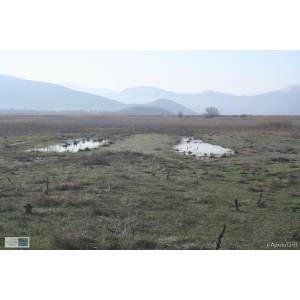 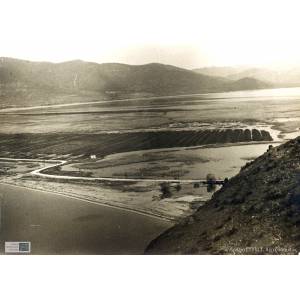